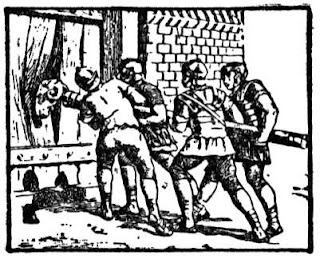 It does exactly what it says on the tin. Within these pages you will find twenty down on their luck warriors who are looking for work. They will be more than happy to join the group as hirelings, henchmen, mercenaries, or meat shields.

These warriors are presented without levels, names, or overly specific backgrounds and physical details. It's up to you to give them a name and - if you choose - a more detailed background and physical description. These warriors were designed this way so that you so that you can describe their names, detailed appearances and specific backgrounds to fit your game world, They are presented without levels so that you can match them up to whatever level hirelings the PCs might need.,

20 Warriors for Hire also includes a simple morale system for hirelings, with a few optional rules that can be used to add a bit`more depth and variation to morale and loyalty dynamics within the adventuring group.

.If you're players are not in need of hirelings, you can always use this rag-tag bunch of sell-swords to create bandits, outlaws, enemies, or even replacement characters when things take a turn for the worse and someone needs replacement  character A.S.A.P..

Here is the list of Warriors for hire, minus a few entries. that still require a bit more work.
You can read some of their profiles below.

Battered Veteran
This former soldier's old wounds forced him to retire. He has grown tired of sitting around taverns swapping war stories, and his meager savings have run out. Despite his bad leg and declining health, he can still swing a sword and haul loot. He has poor manners and loves to tell crude jokes, but he is extremely loyal and can offer useful advice gleaned from years of battlefield experience.
Boastful Knight
This fast talking former knight has sold off most of his possessions save for a few treasures that he just can't bear to part with. He is a competent warrior, but he greatly exaggerates his own ability. He is loyal as long as he is paid well and isn't asked to do anything suicidal. If things get bad, he might desert the group.
Conscripted Farmer
This big ox of a man was a farmer until he was conscripted into military service. The war is over and he doesn't know how to do anything but grow wheat, lift heavy things, and bash heads. He is a slow learner and often lacks common sense, but he is happy to help with any task, no matter how menial or life threatening. He is very loyal, but he has a fear of magic that might cause him to panic at the worst possible moment.
Grizzled Miner
This short, stocky man used to work as a miner. He had to leave his last job after he was accused of murdering three of his fellow workers in a drunken brawl. He is a hard worker, and his knowledge of mines and caves will come in handy until he tries to kill the rest of the group and loot their corpses.


Comments? Thoughts? Do the "vague" NPCs add or detract from the usefulness in your game?
Posted by Unknown at 8:00 AM