Lizardfolk Characters for Lamentations of the Flame Princess 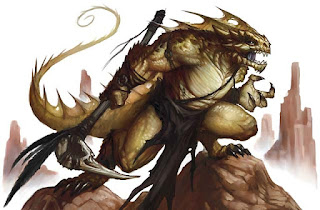 Here's a class I just finished up for Lamentations of the Flame Princess. After doing Grippli last weeek, I decided to do Lizardfolk. This particular variety aren't swamp dwellers; they havebeen toughened and tested by the harsh desert wastelands,

Lizardfolk are proud and powerful reptilian predators that make their communal homes in scattered villages and caverns deep within the canyons and crags of the deserts and badlands.

Most lizardfolk stand 6 to 7 feet tall and weigh 200 to 250 pounds, their powerful muscles covered in scales of gray, green, or brown. They have powerful 4 to 6’’ tails. Some breeds have short dorsal spikes or brightly colored frills. Their reptilian blood makes them sluggish in the cold, so most hunt and work during the day and retreat to their homes at night.
Lizardfolk have one mating season a year. Both females take a single mate and lay small clutches of a half a dozen eggs or so. The eggs incubate for eight months, and hatchlings take roughly five years to mature.

Lizardfolk are a martial species who value prowess in battle and hunting above all else. Content with the simple weapons and rituals that have served them well for millennia, Lizardfolk are viewed by many other species as backwater savages, but within their isolated communities Lizardfolk are actually filled with tradition and an oral history stretching back to before humans walked upright.
Lizardfolk live in a perpetual state of war among their tribal groups, participating in eternal sorties from their isolated desert canyons and ancient ruined cities to attack other Lizardfolk settlements and expand their territory.

Though generally neutral, towards other species, Lizardfolks’ standoffish demeanor, staunch rejection of civilization's “gifts,” and legendary ferocity in battle cause them to be viewed negatively by most other species. Conflict with species other than their own kind rarely occurs unless it is the Lizardfolk that are being threatened.

Lizardfolk have the much maligned custom of consuming the bodies of dead friends and enemies alike. If questioned, the ever-practical lizardfolk are quick to point out that life is hard in the desert, and nothing should go to waste.

In battle, Lizardfolk prefer frontal assaults and massed rushes, but if outnumbered or if their territory is being invaded, they set snares, plan ambushes, and make raids to hinder enemy supplies. Advanced tribes use more sophisticated tactics and have better traps and ambushes.

Lizardfolk may turn to adventuring because they find the wasteland life too difficult, or simply because they crave the rewards of the adventuring life. Additionally, a dishonored or exiled Lizardfolk often has no other choice but to leave the desert and seek his own way in the world..  Occasionally an individual Lizardfolk questions the need for constant battle, or seeks strategies other than brute force. Such iconoclasts often leave their tribes - at least temporarily - to become adventurers.

Lizardfolk are strong and hardy, but are often outsmarted and care little for social graces: +2 STR, +2 CON, -2 INT, -2 CHA

Unlike humans, Lizardfolk can go 72 hours without water before suffering any negative effects by discharging excess salt from within their systems. Once those effects begin, they are treated as per the standard rules.

Lizardfolk begin the game knowing how to speak Common and Lizardfolk. Most Lizardfolk are illiterate in Common but can read and write the simple, symbolic glyphs of their native language.

Lizardfolk have tough scaly skin, granting them an initial  AC bonus of +2. This bonus increases as the Lizardfolk gains levels, and it applies even if armor is worn.

Provided they have free hands, Lizardfolk can make one or two claw attacks, each doing 1d4 damage. If two claw attacks are made, treat them as per “Dual Wielding” as detailed in the “Combat” chapter.

A Lizardfolk can attempt a tail sweep every other round, swinging his tail into his opponent with the intent of knocking him to the ground. This attack can be combined with one other attack, as per the “Dual Wielding” rules in the “Optimal Rules” section’
A Lizardfolk’s tail attack does no damage. Instead, on a successful hit, the enemy trips and falls prone, taking a +4 AC bonus against ranged attacks, but a –4 penalty to AC against melee attacks. He also suffers a –4 penalty to attack rolls and cannot use a ranged weapon except for a crossbow. These modifiers apply until the prone opponent’s next t turn, art which time he can rise to his feet.and remove the modifiers.

Optional Dual Wielding RulesIf you fight with two melee weapons at once, you can roll damage for both weapons and pick the better of the two rolls.

In addition to e normal pair of eyelids, Lizardfolk also have a  transparent membrane between their eyeball and their eyelid. This can be used to blok out dust particles snd debris while still mentioning vision.

Lizardfolk can see perfectly in the dark up to 6o’.
A Lizardfolk can see twice as far as a human in starlight, moonlight, torchlight, and similar conditions of poor illumination. He retains the ability to distinguish color and detail under these conditions.

*** Constitution modifiers no longer apply
Posted by Unknown at 10:44 AM