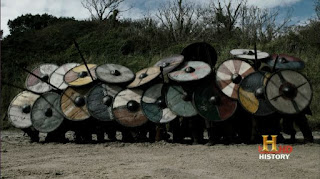 I've been working on some OSR compatible rules for using shield walls in an upcoming rules hack I am planning.

I see the issue as having a few factors:


So, poking round some OGL sources, I found some rules that might be appropriate. Here they are, presented stripped of their 3unnecesary .5/Pathfinder details and boiled down to their OSR essence.

For the record, emulating huge shield walls is not the goal of this system.These rules are designed for smaller groups and to simulate phalanx styled fighting as well. I may add another section regarding phalanx fighting, or just add a little bit to what I have here and call it a day.

Many tricks and techniques have been developed to ensure mutual safety in combat, but few have proven as effective as the shield wall. By drawing up close to one another and facing the enemy whilst locking shields tightly together, a small group of warriors may hold off opponents who greatly outnumber them with relative ease.

At least three characters are required to form a shield wall and all must have a large shield. When three or more team members are standing in a straight line and wielding shields, they form a solid line of defence. t takes a standard action for all participating to form a shield wall and a leader must be nominated from amongst their number to co-ordinate the actions of all. This leader must make a Charisma check by rolling less than or equal to his CHA on 1d20. Failure will result in the shield wall being formed incorrectly and without sufficient coherency – no bonuses will be gained.

Benefits of the Shield Wall

Characters behind a shield wall may fight normally across the line, provided they have weapons with reach or range. A shield wall may be dissolved at any time by the characters forming it. Characters within a successfully formed shield wall will gain a +11 morale bonus to all attack rolls and a+2 morale bonus to all Will saves and their Armour Class so long as the shield wall is maintained. Each character will also take up half the space he normally does, thus allowing greater numbers to fight along a narrow frontage.Each shielded member in the line has cover against r.melee attacks (+2 bonus to AC) ranged attacks (+4 bonus to AC). This applies even if one or more members in the line are threatened by an opponent, so long as at least one in the line can see the ranged attack coming and yell “shield wall!”

A shield wall is automatically dissolved if less than three characters are present within it.

In addition, any member of a Shield Wall receives a +4 synergy bonus to Strength checks when resisting a Bull Rush attack, or to Strength checks (but not Dexterity checks) when blocking an Overrun attempt. - d20 OSR Source, needs converting to OGL use.There may need to be another way for cobatanats to break through a shield wall, although perhaps dropping the number of shield wall participants to less than three may be sufficient.

Toughts? Opinions? Should more cobatants be required to make a shield wall? Should the number be linked to rge actual square footage of the area? Are the bonuses to high?  Should smaller shields be alllowed to work in a shield wall?

Thanks for reading!
Posted by Unknown at 4:50 AM